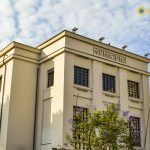 The Town Hall is an important landmark of Cava de’ Tirreni and is situated in “Piazza Eugenio Abbro”.

In 1964, a resolution declared the original building the new Town Hall, whose structure was expanded with a second floor and an extension on the western side. From the square, you can admire the facade of the building (which has been recently remodeled), while on the inside you can admire the Reception Hall ( named Salone di Rappresentanza) adorned with artworks and which hosts conferences and meetings.

Near the entrance of the Town Hall, you can find the main square (titled to the major Eugenio Abbro) which is flanked by steps and surrounded by trees, overlooking an open area whose style resembles that of a chessboard, called “Scacchiera”. From the square, you can also admire the war memorial monument dedicated to those fallen in war (Monumento ai caduti di tutte le guerre), where each year the town celebrates the anniversary of the Foundation of the Italian Republic.

Next to the Town Hall you can find the Town Park (Villa Comunale), one of the green lungs of Cava de’ Tirreni. The park was built in the 19th century and draws inspiration from the style of English gardens; today it is a place of meeting and leisure for both citizens and tourists, who can walk through the park to admire the central fountain or relax at the local kiosk.

From the Town Hall, you can easily reach other landmarks, such as the Borgo with its portici, the Duomo, and the Convent of St. Francis and Anthony.

The Town Hall building was originally a theatre named “Giuseppe Verdi’s Theatre” – in honor of the great italian musician Giuseppe Verdi – and was open for 75 years.