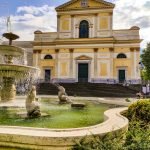 The Duomo of Cava de’ Tirreni (Duomo di Santa Maria della Visitazione) is one of the town’s most important places of worship and a point of reference for the town’s community since the 16th century. The Duomo was realized by architect Pignoloso Cafaro and it is located in what was formerly the town market.

The Duomo is located in the main square of the town, with 19 steps composing the entrance staircase. Completed in 1587, the building went through several transformations, only settling to its current appearance in the 19th century with the removal of the marble facade cover.

On the inside, you can admire several works of sacred art, such as the altar dedicated to St. Auditore (patron of the town whose statue is placed on the side chapel), the 16th-century marble baptistery and the choir. The completion of the building took a long time and several consolidation interventions after the 1980s earthquake in Italy.

In front of the Duomo you can’t miss the Fountain of Dolphins (“Fontana dei Delfini”), created in 1818 by sculptor and painter Alfonso Balzico and embellished with four sea monsters on each side. The fountain represents a famous meeting point for the community and nightlife, with several restaurants and bars nearby where you can enjoy yourself with dinners and aperitivo.

Near you
From the Duomo you can easily reach other attractions and places of worship, such as the Covent of St. Francis and Anthony, the Basilica of St. Mary of the Elm and the church of St. Rocco.

In 1894 Pope Pius IX and King Ferdinand the Second of Bourbon stopped by the town of Cava de’ Tirreni while on their way to the Cathedral of Salerno to admire the Fountain of Dolphins.