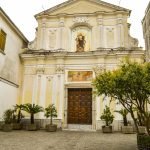 Church of the Assumption of St. Mary

The Church of the Assumption of Saint Mary (Santa Maria Assunta in Cielo e delle Anime del Purgatorio) is situated in the heart of the “Borgo Scacciaventi” and it is one of the examples of Baroque architecture in the town. The church was founded in 1749 by Felice and Domenico Cafaro and today it is the head office of the Confraternity of the same name as well as part of the bigger structure of “Complesso Monumentale del Purgatorio”, which comprises the oratory and the adjacent rooms.

The church was strongly desired by the Confraternity as a representation of the artisan and mercantile class of the 18th century. The Confraternity wished for a bigger and magnificent church to represent the growing importance of the town over the years.

The church is situated near the ancient oratory built at the beginning of the last century and it is characterized by a square churchyard surrounded by buildings and facing the main street. The baroque facade anticipates the interior of the church, decorated with stucco works with baroque and rococo’ themes and shapes.

The church presents a Latin cross longitudinal plan, with side walls interspersed with shallow chapels. At the end of the building you can find the high altar in inlaid marble and an ancient mixtilinear balustrade.

Leaving the Church you can stroll to the Borgo with its Portici and easily reach other landmarks, such as the Duomo, the Convent of St. Francis and Anthony and the Town Hall.

According to historical references, the Confraternity was founded during the Spanish domination by some artists from Cava de’ Tirreni with the help of the citizen P. Ignazio de Jiuliis.