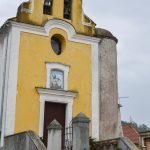 Church of St. Mark the Evangelist

The parish church of St. Mark (Chiesa di San Marco) is a place of worship situated in the small village of “Marini” in Cava de’ Tirreni, dating back to the 15th century.

The church dedicated to the St. Mark the Evangelist was erected in the second half of the 16th century by the inhabitants of the village. The older foundations of the building have been incorporated into what today is the main chapel of the church, and its current appearance was concluded in 1628 with the addition of two pre-existing chapels.

On the outside, the sober 18th-century style facade differs considerably from the elaborate decoration of the interior, characterized by frescoes in the vault and frames with golden ornaments.

The Latin cross plan building comprises of a single nave with a transept with short arms and a rectangular apse, where you can admire the painting of the Madonna of Constantinople and the high altar with the image of St Mark the Evangelist.

Thanks to the willpower of the inhabitants of the Marini village, in 1625 the original chapel became a parish Church through the bull of the bishop Matteo Granito (giving the church its own income and the constant presence of a priest)..