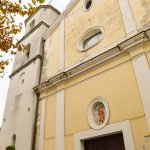 Church of St. John the Baptist

The Church of Saint John the Baptist (San Giovanni Battista a Casaburi) is one of the oldest Churches of Cava de’ Tirreni and is situated in the village of Rotolo-Casaburi.

The building – whose date of foundation is not known – was recognized as a church in 1441 by King Alfonso I of Aragon. The building is part of a small architectural complex that comprises the bell tower, the sacristy and the oratory of St. Mary of the Purification (Santa Maria della Purificazione), whose facades occupy the quadrangular churchyard.

The church is characterized by a rich baroque style interior and a sober neoclassical facade, following a longitudinal plan with a single nave, with side walls marked by round arches including small rooms.

Due to the 1980s earthquake in Italy the church was closed to the public, only to be reopened 26 years later in January 2007.