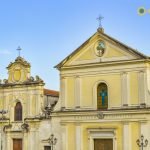 Basilica of St. Mary of the Elm

The Basilica of St. Mary of the Elm (Basilica di Santa Maria dell’Olmo) is one of the most famous landmarks of Cava de’ Tirreni. The first historical reference to the Cult of the Virgin dates back to 1428, when Francis of Paola laid the first stone of the building, later declared Basilica by Pope Pius XI in 1931.

The Basilica was built in 1482 and consists of a single nave with small side chapels and a painted ceiling depicting episodes from the life of Francis of Paola. On the inside, you can admire the high altar dedicated to the Sacred Heart, the statues dedicated to St. Auditore, and a marble pulpit realized by the town’s sculptor Alfonso Balzico in the 20th century.

Adjacent to the Basilica you can find the Order of Minims, embellished with a cloister from the 16th century (now used as a venue for concerts), and the Congregation of the Oratory of Saint Philip Neri, which hosts the library and youth and parish activities.

In 1672, St. Mary has been declared the patron of the town and is celebrated on the 8th of September. From 1869, the Basilica was managed by the Congregation of the Oratory of Saint Philip Neri, which also realized the pulpit, fixed the altar, and provided a new organ (which is still used today).

From the Basilica you can easily reach the Convent of Saint Francis and Anthony, the Borgo with its Portici, the Duomo, the Town Hall and Park.

In 1100, some pastors found a painting stuck between the branches of an elm, where they decided to build a chapel. Later on, that chapel was incorporated by the current Basilica, whose name is inspired by this episode (in Italian the original name Basilica di Santa Maria dell’Olmo can be literally translated to Basilica of St. Mary of the Elm).